In 1810, the worst actor ever took the stage as Romeo.

His name was Robert Coates, and from a young age he’d known he was born to take the stage. The stage disagreed, but Coates was in possession of a £40,000 per year income. I’m not sure what that works out to today, but it’s definitely multiple millions, and the kind of cash that can open pretty much any door you like.

The most charitable way to describe Coates’ acting would be ‘unique’.

He came with his own costume. One theatre-goer described it as:

“His dress was outré in the extreme: whether Spanish, Italian, or English, no one could say; it was like nothing ever worn. In a cloak of sky-blue silk, profusely spangled, red pantaloons, a vest of white muslin, surmounted by an enormously thick cravat, and a wig à la Charles the Second, capped by an opera hat, he presented one of the most grotesque spectacles ever witnessed upon the stage.”

Despite knowing the whole of Romeo and Juliet off by heart, he delivered every line wrong. This was deliberate, because he felt he was improving the text.

If he liked a scene, he performed it multiple times. Deciding the ending of the original wasn’t quite right, he came on again to remove the lid of Juliet’s tomb with a crowbar. Occasionally he’d break off from a speech to beg some snuff from the audience.

The theatre manager, one William Wyatt Dimond, was by the end of the performance contemplating murder. After Coates’ eleventh death scene, he finally gave the order to drop the curtain.

The audience sat in silence.

And then broke into a standing ovation. They’d loved it.

These days, we’re used to more 4th-wall breaking performances. But this was Monty Python 160 years early. The content of this Romeo and Juliet certainly wasn’t what the audience had expected.

But in context, it fit perfectly. They’d come to the theatre to be entertained. And the worst actor in the world was VERY entertaining.

If you’re selling information, the best way to make people like it and want more isn’t to make the content of incredibly high quality, or reveal things they’d never known before. It’s to make sure that whatever you say, you’re entertaining while you say it.

That way, people will enjoy reading what you wrote.

In the context of them enjoying themselves, they’ll assume what you wrote is good. After all, they definitely think it’s good, and they wouldn’t think it was good if it wasn’t high-quality information, right?

This works in a very similar fashion to the authority effect – that we’re more likely to believe someone we perceive to have authority on a topic. And if we don’t have any actual data, the fact that they’re wearing a nice suit or up on stage will do. Put information in the context of authority, that information will gain authority by association.

Likewise, put a product in the context of something desireable, and the product becomes more desireable. (All those car ads with pretty women sat in the driving seat? I’m looking at you)

Or a more shareable example: 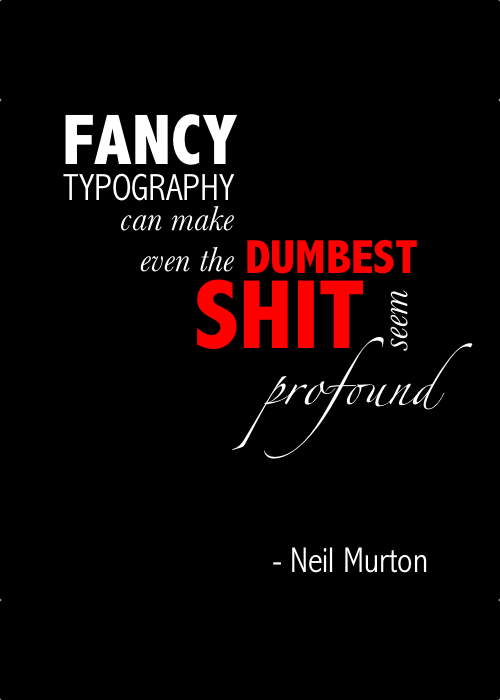 This doesn’t mean you can exist solely on style forever. Robert Coates’ theatre career was short – he was a one-joke act, and it didn’t take audiences long to not find that joke funny any more.

But when you’re trying to build a following or just make sure your readers keep coming back, what you say is rarely as important as how you say it.